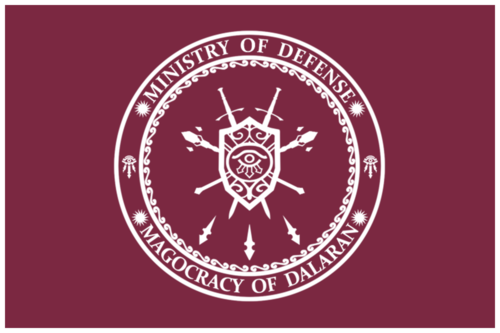 The Ministry of Defense
The Dalaran Ministry of Defense is one of the four ministries of the Magus Senate of Dalaran. The defense ministry is responsible for the military actions undertaken by the Senate. The ministry is also responsible for the planning and execution of field expeditions, deployments, and observations while acting as a front-line defense for other magi in the field. The personnel of the defense ministry work closely with other organizations within the senate to provide for their safety in the field.

Previously only active during times of conflict, since the invasion of the Iron Horde, the Ministry of Defense has been fully established and now wields the wartime powers to dictate how to proceed. This newfound power has been used to establish alliances with other battle ready factions and place Dalaran squarely within the military infastructure of the Grand Alliance.

The Ministry of Defense is comprised of the following offices, the order they are placed in does not denote their position in the hierarchy.

The Minister's office comprises of the general staff required to run the Ministry. The office is responsible for the management and execution of war plans, disseminating orders to field personnel, signing off on logistics requisitions, and deployment of troops to combat zones.

Department of the Battlemage Corps:
The battlemage corp comprises of highly trained field operatives, known as Battlemagi, warfighters who are adept at magic and skilled warriors. These agents form the bulk of infantry doctrine of the Magus Senate of Dalaran. The office of the battlemage corp is responsible for maintaining training standards, drill plans, and obtaining and overseeing the training of recruits into the corp. The structure is as follows.

Department of the Navy:
This office is responsible for the maintenance and upkeep of existing Dalarani ships under the influence of the Magus Senate of Dalaran and also the construction of new ones. The Dalarani fleet is relatively small and as such does not have a large number of ships. This office is headed by the Mage-Commodore.

Department of Tactics and Logistics:
The office of tactics is dedicated to determining the best tactical course of action for any deployment or long term series of actions. The office of tactics then advises the minister of war on appropriate actions to take. The Office is also responsible for determining the logistical requirements for a deployment and then assigning gear to troops upon deployment. The office is headed by the Chief Logistician.

Department of Engineering and Ordinatii Oversight:
The Ministry of Defense oversees the Ordinatii Division, the senate's custodians of heavy weaponry, experimental weaponry, and weapons of mass destruction.