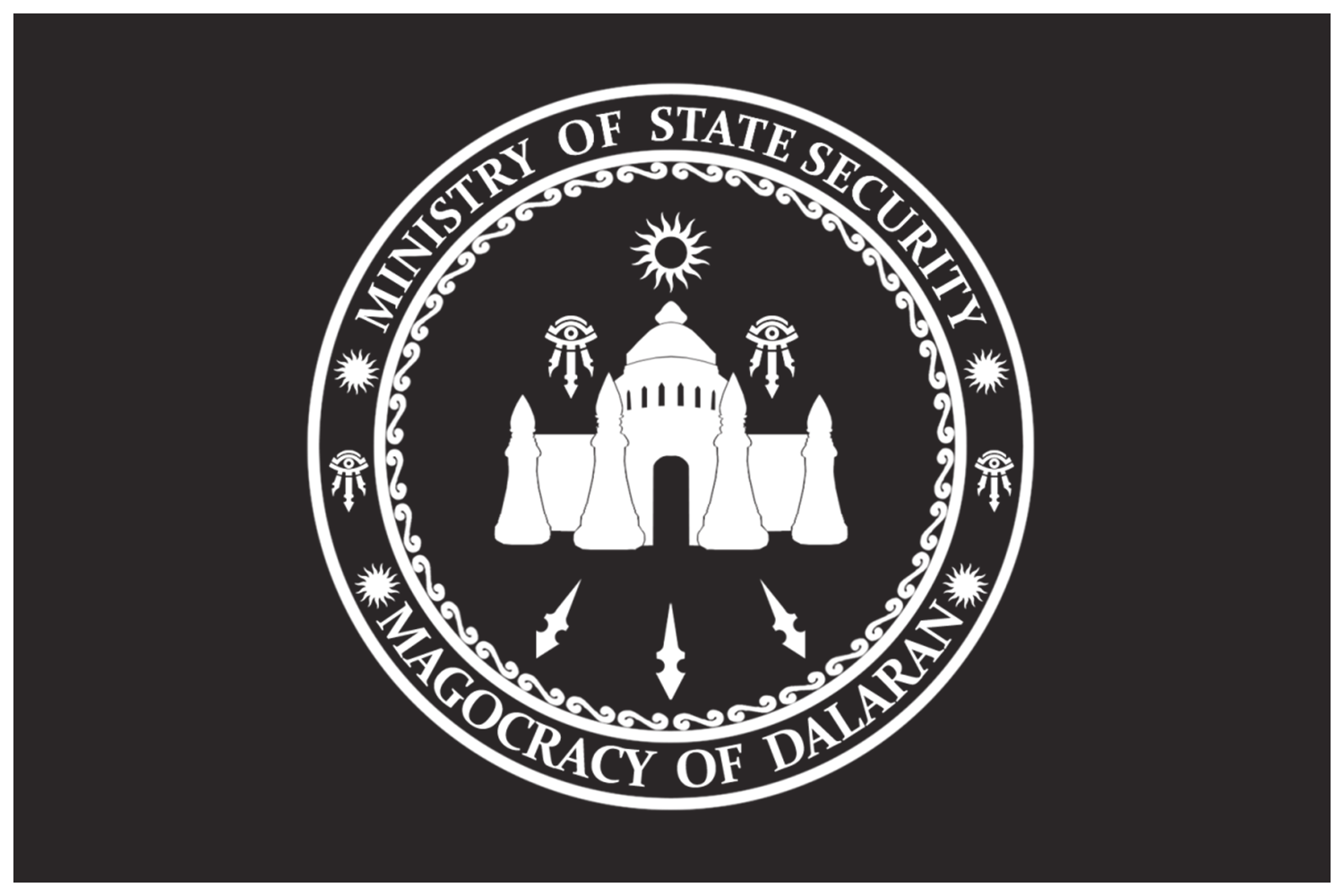 Director of the Violet Eye: Vacant

The Violet Eye:
The Violet Eye, under the auspices of the Magus Senate, works to further the interests of the Magocracy by performing necessary espionage. The Eye is tasked with ensuring public security for Dalaran and its territories through foreign intelligence gathering, counter-intelligence, operations, investigating and apprehending rogue spellcasters, as well as investigating breaches of and enforcing the Forbidden Magics Act outside Dalaranian territory.

Director of the Violet Eye: Vacant

Ministry Offices:
The Ministry of State Security is headquartered within the Chamber of the Guardian, as one of several offices located within the Spire. Aptly situated within the center of the City and constructed to withstand a Legion assault, the Chamber serves as a suitable location for overseeing the security of Dalaran.

The Violet Hold:
Among the ornate spires and enchanted streets of Dalaran lies the towering Violet Hold- the Kirin Tor's prison. Within, the city keeps criminals and forces of evil alike behind arcane barriers, each categorized into three different levels of security. It is arguably the most secure prison on Azeroth, being well-defended by might and magic alike. The Violet Hold is lead by the Warden of the Violet Hold.

Warden of the Violet Hold: Alturas

Nethergarde Keep:
The original Nethergarde Keep was built after the Second War — following the destruction of the first Dark Portal — at the behest of Archmage Khadgar to ensure that there would be no further invasions from Draenor. However, it was destroyed when the Iron Horde invasion force, the Ironmarch, aided by the area's Dreadmaul ogres, invaded through the Dark Portal.

The Magocracy of Dalaran has since rebuilt Nethergarde Keep to continue watching over the remnants of the Dark Portal and as a base for both the Ministry of Defense and the Ministry of State Security. Certain upgrades were made to the rebuilt fortress, such as upgraded defenses and the addition of a harbor for Dalaran's naval fleet. Other additions were included in the new structure, many of which are a closely guarded secret by its occupants.

Dalaran Arcandome:
As part of a series of security upgrades for the City of Dalaran, there has been put in place a heavy modulated temporal dissonance field around the City, except in and around the Violet Gate. This temporal dissonance field, also known as the “Arcandome,” will prevent teleportation into and out of Dalaran except through the Violet Gate. If the caster attempts to teleport into the City except through the Violet Gate, they will find themselves redirected to the Violet Gate, and any attempts to teleport out by the caster circumventing the Gate will find that their teleportation attempt categorically fails. In addition, with assistance from the Nightfallen, the Arcandome also protects against teleportation using telemancy, ensuring that space-time rifts are also blocked except to/from Violet Gate.

Note: that as a hidden redundancy to the Arcandome, any forced attempts to override the dissonance field will trigger a failsafe, and the caster will find that their teleportation spell is automatically redirected to a Level 2 holding cell within the Violet Hold for breach of the Teleportation & Portals Act, pending trial.

Powered by several independent Saraphix Aurum Generators hidden in classified locations throughout the City, the Arcandome will thus be unaffected by attacks on the city itself, which include any forced siphoning of magical energy from the City proper.

The Dalaran Arcandome was conceived out of a need to protect the City from unauthorized entry/exit, specifically to evade justice or commit another crime. Partially inspired by Jaina Proudmoore's warding of Darnassus prior to the Divine Bell incident, and more directly through the escape of a suspect from an arrest attempt, the Arcandome is designed to secure the city from similar setbacks again.

Dome of the Infinite:

The stellar observatory functions in a similar fashion to the one in the Nighthold, except there is a central control nethercrystal positioned in the center of the deck, which allows the user to set the distance of viewing, as well as opening and closing the panels. Note, it is heavily suggested that panels be closed between shifting observations, as it may cause nausea.

This observatory also has a number of modifications to better suit the Kirin Tor, including but not limited to the ability to record observations onto holocrystals, and the ability to see deep space in virtually real-time, as opposed to observing light that reaches Azeroth many years down.

As a testament to its viewing capabilities, it has been formally named the Dome of the Infinite.

Tours available upon request when not in use by the Department of Magical Defense.